BMW is busy electricking all kinds of things. The latest is the MINI Countryman hybrid, the first of the British brand’s line to get a power cord and go mainstream. Unlike MINI EV experiments of the past, the Countryman PHEV retains all of the good qualities of the (wait for it) biggest MINI. Now that the obvious pun is out of the way, exploration of the 2018 MINI Countryman plug-in can commence. For reference, the 2018 MINI Countryman hybrid is officially called the Cooper S E Countryman. Previous renditions of electrified MINI mobiles included the MINI E, a battery-electric version of the tiny two-door Cooper in which the rear seats were completely thrown out in favor of a large box to house batteries. Not only did this destroy the interior appeal of the Cooper, it led to questionable road dynamics and technical difficulties. That haphazard entrance into electrification, thankfully, didn’t last long. Now that BMW has had a lot of practice adding plugs to its lineup, from the big X5 Plug-in to the latest 5 Series awesomeness, the company is getting much more confident. Dedicated electrics like the BMW i8 and excellent little i3 are proof that the Germans have figured out the whole plug-in thing. Now comes the first serious entry from British brand MINI. The 2018 BMW MINI Cooper SE Countryman sees the standard Countryman model largely unchanged in terms of looks and interior dynamic. What really changes is the big MINI’s (did it again, sorry) power output, fuel efficiency, and road dynamic. All for the better, we note.

The electrification of the MINI Countryman is using a system very similar to that found in other BMW vehicles, pairing the car’s existing engine to a set of batteries and an electric motor to allow some all-electric operation while boosting power output to make up for the weight gains with the additions. The system is added intelligently, though, aiding the Countryman’s core MINI trait of fun road dynamics rather than being there to spite them. True to the BMW brand itself, the Countryman hybrid is fun to drive. More so than other MINI Coopers we’ve driven recently, in fact.

The drivetrain is very well thought out. The standard 1.5-liter turbocharged three-cylinder engine sits under the hood. That engine produces 134 horsepower (100 kW) and 162 pound-feet (220 Nm) of torque. An automatic transmission is paired to that. Back at the rear axle, there is an electric motor added. Between the transmission up front and the motor in the back sits a battery pack housing 7.6 kWh of power. Combined output between the engine and the motor becomes 221 hp (165 kW) and 284 lb-ft (385 Nm).

The keys here are the combination of power output at lower speeds between the engine and electrics. In normal driving, the engine doesn’t need to run at all and the Countryman plug-in retains a range of up to 18 miles (29 km) per charge. Our real-world averages during our week with the MINI plug-in were close to that, with our best range being about 18 and some change. In more stop-and-go traffic conditions, the 18-mile EPA estimate is likely realistic. We also found that the 27 mpg (8.7 l/100km) combined EPA rating is a bit conservative for the car.

Having driven most of the MINI models in their current generation, it’s safe for us to say that the Countryman is easily the most useful of the group, though it’s also usually the most sluggish. Adding all of that extra size means more weight, and the little 1.5L is pushed to its limits with that bulk. The 2.0 is far better suited and can make a vehicle of the Countryman’s size (or its BMW X1 cousin) a lot more entertaining. Even so, the Countryman is the least sporty in the MINI line. Until you add these hybrid bits, that is.

With the plug-in components and the added umph they give, the MINI Countryman suddenly comes alive. Dr. Frankenstein might have been onto something with his whole shocking setup (puns! They’re alive!), adding plugs to the monster’s physique. The MINI Cooper S E Countryman is punchier, feels faster, and has a tighter chassis than do its siblings.

The tighter drive is thanks to the sportier suspension of the S model having been beefed a bit for the added weight of electrification components. The better balance and lower center of gravity from the batteries being slung beneath add to that. The increased torque and its faster delivery thanks to the electric motor make for the better off-the-line feel. This all comes together well and brings a great dynamic to the Countryman hybrid.

The 2018 BMW MINI Cooper S E Countryman also has a great interior experience. The Countryman itself has a larger cabin with more room and superior comfort elements as compared to a more standard-sized MINI. The rear seats in the Countryman are adult-usable, unlike nearly all other MINI models. The cargo area is also good, though not as large as some other compact crossovers like the X1. A flat floor and low loading height are good tradeoffs there, though, and the rear seat 40/20/40 split that actually drops flat is another bonus. 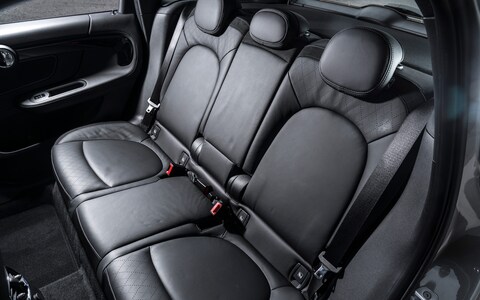 Seating in the MINI Countryman is well-done with the sport bolstering expected of a MINI but with the added luxury expertise and adjustments perfected by BMW. Small item storage and gadget stowage are good, with a universal cell phone mount being found in the center arm rest up front and a nice little caddy ahead of the drink holders also making for a good drop spot. Plugs for USB and 12v items are fairly plentiful as well. The rear seat is surprisingly child-friendly too, with easy-access LATCH positions and widely-spaced seat belt receivers.

For the driver, the instrument cluster is all MINI and the switches found throughout are definitely from Cooper. The large infotainment system found as standard in the Countryman plug-in dominates the center console and is controlled through a command knob next to the shifter at the driver’s right hand. Americans will note that the knob works in the reverse of intuitive clockwise motions due to it being intended for left-handers sitting on the opposite side of the car to drive. This is MINI’s way of nodding towards British patrons and lightheartedly snubbing us Colonials.

The Countryman hybrid’s infotainment and driver instrument cluster are different from the standard MINI line in a few key ways. The instrument cluster has the RPM gauge replaced with an energy usage and power output gauge instead, a combination of a dynamic lighted line to the outside and a moving needle inside. Together these indicate the amount of battery power available, how much is being used or regenerated (depending on whether going or stopping) and what the engine is putting out up front. These require a little getting used to, but are a more clear picture of what’s happening in the powertrain than a straight-up RPM gauge would be in a hybrid like this. A simpler form of this information is indicated on the head-up display, if desired, but isn’t as useful. MINI also added an extra warning light to indicate if the plug is still attached to the car, so drivers don’t absentmindedly pull away while still plugged in.

On the infotainment screen, a menu cluster has been added for the vehicles’ economy and plug-in hybrid systems. These indicate the MINI Countryman hybrid’s power state, efficiency dynamics, driving mode, economy, and so on. Some of these screens are triggered when the dedicated eDrive switch is used (located in the switch array at the bottom of the center console). That switch allows the driver to quickly go through the three driving options for the S E Countryman. One option forces electric driving, the next has the computer balance driving for maximum efficiency, and the third forces the engine to be the only power source in order to preserve battery charge. Also in that switch array is a toggle to raise and lower the head-up display manually (it normally closes when the vehicle is off and opens upon start).

After a week in the 2018 BMW MINI Countryman hybrid, we came away impressed. As a compact crossover-style vehicle with the fun of MINI and the space needed for a small family on the go, it’s a great choice in the luxury market. Add in the fun factor that only MINI can provide and the unique style that this British brand has, and you might have a winner. Whether that’s chicken dinner, however, will depend on what you expect out of a vehicle this size and out of a MINI-branded vehicle. MINI loyalists may not be impressed with the Countryman or its plug-in option. For the rest of us, we’ll belly up to this table.